It's Thursday night, and your stomach is knotted.  It's the second day back from your weekend, and your station is just the way you like it.  Everything is in its place, your board is clean, and you got through prep quickly enough to sharpen your knife.  All of the best cooks are on the line tonight, and your chef de cuisine finally listened to you about the pasta app, using your idea.  Everything is going great, but your face is still crossed.  And the reason for your stress just stumbled into the kitchen and knocked over your salt.

His name is Oliver, and tonight he's the tournant.  The idea is that Oliver has shown enough drive and raw skill to move off of the cold station, and get a chance to lend a hand and even try to fill in for a few orders as the night goes on.  Ideally, Oliver would already be proficient on all of the stations in the kitchen before being given this position.  But this is simply not the case.  The exec sees the tournant as a position to train a cook.  So as the night wears on, you will have Oliver on your station, trying not to fuck it all up.

Around 8:30, the kitchen is a hot, sweaty mosh pit.  You've barely uttered two words, and there's a soft crease running across your forehead.  There's a quiet, aggressive focus driving you.  Oliver steps into your station on the pick up, holding a fish spat.  His hands are shaking like he's had too much Mountain Dew (which is probably accurate) and when he goes to plate, he cracks your perfectly cooked filets of sole in half.  Without missing a beat you drop another one, only to catch him saucing the duck...but not before he dribbles sauce across three other plates.  You wipe furiously, flip your fish, and send plates.  There are still five orders of pasta on your burners, and you catch Olivers gaze.
"Two and three.  Ill take the three.  Go."
Oliver twirls the pasta around his tongs and goes to nestle the noodles gently, but his grip slips.  The pasta flings out of the spring loaded tongs and into the pile of chives you just cut a la minute.  You drop two more orders, race to cut more chives, and finish the plates.  Then you realize your sole re-fire scorched.

There are two options in this situation:
Training and teaching a young cook is the seasoned vets job.  Sure, you could just show up every day and cook.  And when the green cook steps onto the station you are not required to give them much more than a grunt and growl.  But the goal in cooking is to pass on your craft.  The mark of a great cook is one that leaves a mark on all those around them.  In a way, your success will end up hinging on them.  As you progress through the kitchen, your ties to these cooks become all the more important.  It's no longer about your own station; its about the kitchen, and the guest, and the well being of the restaurant.  Everything becomes your responsibility, and subsequently everything becomes your fault when it all goes to shit.  It's so easy to lose your patience, and write these green cooks off.  But you came up the hard way, and went through all of the same things.  And regardless of whether or not there was a cook there to teach you, you have to see the importance of being a mentor.  I'm not saying you should hold their hand.  A little venom in your approach might help to motivate your student.

Three weeks later, you are working tournant.  Your exec would be pissed if he knew you had switched with Oliver, but you feel like the kid is ready to do give your station a shot.  As he settles, you step back from the station, stepping in only to turn burners down, wipe plates, and point out small details to him.  As he goes to plate his sole, you hold your breath for a moment.  But his hand is steady, with that familiar soft crease running across his forehead.  The kid is getting it.  And you got to guide him down the right path.

"There's a direct ratio.  As you soften, I harden.  You're doing yoga, and i'm turning into a foul mouthed asshole."
-Eddie

"At this place they'll make a wax mold of a vagina and give it to you."
-Corey

Me:  Whatta ya say Eddie?  Would you have a little casual sex with me if I took you to a nice dinner?  If I took you to Sebo and got you drunk on soju?
Eddie:  If you took me to Sebo...
Me:  Then we could just go back to your place.
Amy:  I think it's more like a wam-bam thank you maam in an alley.
Me:  That is more my style.
Amy:  I know it's more your style.

Me: OK.  Who would win in a fight:  A land shark or a sea bear?
Paulie:  Land shark.
Camaal:  Land shark.
Eddie:  It's gotta be the land shark.
Gerardo:  Sea bear.
Me:  Why?
Gerardo:  Cuz it's a fuckin' bear!
Me:  OK, same question, but this time it's between a four headed eagle and a flying rattlesnake.
Gerardo:  I got a rattlesnake for my tenth birthday.

Gerardo:  What the fuck is espinacas?
Me:  Spinach.......Gerardo, I don't want you using language like that in the kitchen.
Gerardo:  Spanish? 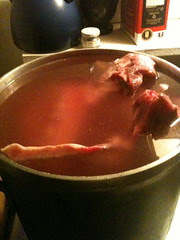 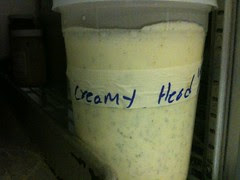 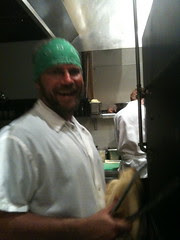 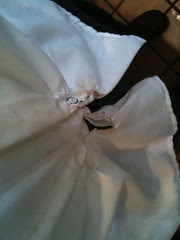 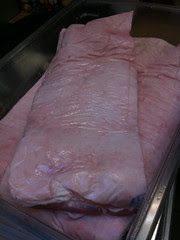 from top: 3am stock, creamy head, corey, that was close, pork belly.

Please remind corey not to ask for a shark vagina at the vagina manufacturing place!

Great post. Sometimes it's easy to forget and just get caught up with where we're at with regards to our own skill set, mise, career path or what have you. It's easy to overlook those who could benefit from your experience and wisdom.

But before we go off singing kum ba yah with the tournant... don't forget to whack him in the sack once or twice and tell him he's a no good fuck up! Not sure what happens when the tournant is a female...guess the ball shot won't hurt as much.

Anyway, afterwards when you're cleaning up or having a shift drink, you can give them a thumbs up and a "you aren't so fucking bad after all!"

"why is it that 75% of my visitors at work are out of their minds drunk?"

I suspect Neyah, Matty, Yanni, et al might have some small part in that particular phenomena. Plus, you know, you gotta work up some steam before saying "hi" to the famous "linecook"!

Your observations are great... and applicabl to any supervisory situation.

Funny thing about this post (a lot of them actually) I had this same thought tonight at work. I wanted to kick this kid in the head but instead I helped. It's a nice turn of event for me given that I'm a very aggressive person, and I don't hold back what I'm thinking. The difference however, was that this person was training someone else when he had no business doing so. What do you do in a situation like that?

On another note, one major point I have learned about going to culinary (so far) is that you have to teach the ones who are new to "the game" if you don't, you're just being selfish. So, well done again on your blog. Love it.

Great writing as usual Richie. I liked the line, "A little venom in your approach might help to motivate your student." At the place I'm working now, I almost CRAVE that little bit of venom not because I enjoy the rare harshness but rather I appreciate the educational side of it (option #2). Get enough mithridatic venom in you and you'll learn the right technique/work cleaner/listen to directions/prep properly/etc. The worse thing for a young cook is a lack of strict and direct supervision and hands-on training. If you have the patience and skill to take on a padawan, then you are a true jedi and master of your craft.

You mentioned something in your podcast about the old school original food cart vendors being resentful of this recent wave of trendy newcomers. I'm glad to see the NYT giving them a bit of exposure:
http://www.nytimes.com/2009/10/21/dining/reviews/21under.html

and some good advice to all young cooks about "rice dicks": see
http://www.passiveaggressivenotes.com/2009/10/14/the-sushi-nazi/

I guess it all boils down to the rather trite but true "each one teach one." The only way to truly excel at what you love is to fuck up early in the game and listen to the people who know better and are willing to be brutally honest with you. If you don't like it, then move on because you'll never learn unless you listen.

While your teaching methods are very true and we have all been through them, the tournant is not the bitch on the line. Having been a tournant in NY for years, it is actually the seasoned, head line cook who can do any station better than any of the other line cooks thus being allowed to fill in on your days off never missing a beat. Think of the tournant as under the sous who does not have to mess with managerial stuff right now like ordering, scheduling, or dealing with ego centric line cooks pissing on new talent that the exec might want to take over their station. Just a heads up before you belittle what a tournant actually is.

@Michael:
Did you see this line: "The idea is that Oliver has shown enough drive and raw skill to move off of the cold station, and get a chance to lend a hand and even try to fill in for a few orders as the night goes on. Ideally, Oliver would already be proficient on all of the stations in the kitchen before being given this position."

I understand the positions in a brigade...but I think every cook has worked for a chef that tweaked these rules...so thats what I wrote. Thanks for the feedback.